THE BIG BAY BOOM
A STUDY OF ITS  ECONOMIC IMPACT 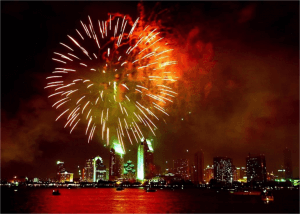 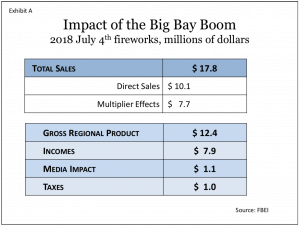 San Diego has hosted the Big Bay Boom fireworks show each year on July 4th since 2001, which has grown to become one of the region’s greatest holiday events. Four barges launch pyrotechnics around Shelter Island, Harbor Island, and the North and South Embarcadero Marina Parks. Over 500,000 viewers attend the annual show.

Funds raised from the show are donated to the San Diego Armed Service YMCA, which serves families of the military in the San Diego region. This charity offers about forty different programs for the families of young enlisted men and women in addition to wounded warriors at the Balboa Naval Hospital.

Approximately 75 companies and agencies plus about 300 private individuals supply funding for the annual show. Another group of trustees and foundations provides additional support. The Port of San Diego is the title sponsor. Many of the sponsors, including hotels, restaurants, retail stores, and marina facilities, are Port tenants. Non-port tenant sponsors include various corporations and other organizations not located on the tidelands. Private donations from individuals and trusts account for a significant amount of the total contributions raised ($30,000 in 2018.). Overall donations reached $82,000 in 2018 and have totaled $967,000 since 2001.

The study attempts to provide an objective analysis of the net economic benefits in terms of sales, income, GRP, and tax receipts to the local San Diego area. The analysis is also made of the return on investment (ROI) for the Port of San Diego based on the rents on sales generated for Port tenants and the expenses for safety, emergency, and other services.

The total economic benefits are analyzed not only in terms of the direct impact on sales activity of hotels, restaurants, and other businesses but also the various “ripple” or multiplier effects. These multiplier impacts reflect the supply chain effects and additional consumer spending caused by increases in hours worked and income. The value of media exposure is also evaluated and presented.

In order to gauge the impact of the Big Bay Boom, surveys were distributed to hotels, restaurants, retailers, transportation companies, attractions, and other Port tenants. Hotel guests were also surveyed. 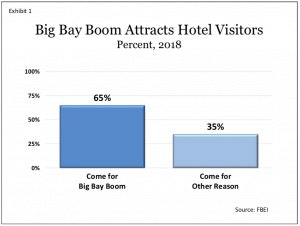 Those surveyed were questioned on a variety of issues, including the reason for their visit to San Diego during the July 4th holiday, the residence of hotel guests, the impact on sales compared with a typical summer day, the duration of hotel stays, and the impact on staffing and pay. The surveys are included in the Appendices of this report.

Respondents to the survey indicated substantial increases in their business due to the fireworks. Relative to a typical day during the summer season (excluding holidays), restaurants saw about a 25% advance in sales on July 4th, while retailers experienced a rise of about 21%. The advance was substantially higher for many boat operators and parking venues. 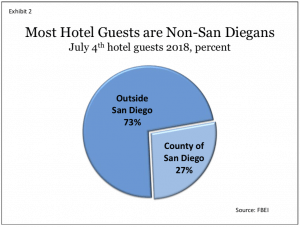 The FBEI specializes in providing a variety of business and economic consulting services to employers, for-profit and nonprofit companies, individuals, organizations, government entities, and others throughout the San Diego Region, as well as nationally and internationally. Consulting services include economic analysis and forecasting, economic impact studies, business plans, customer and consumer trends, market research, feasibility studies, expert opinion, and many other contemporary needs of the business and economic community, public and private, for-profit and non-profit. The Institute also has extensive experience in presenting materials to government officials at all levels and in conducting interviews with local and national media outlets.

Fireworks displayed from four barges on San Diego bay. Where to watch

THE CHARITY WE BENEFIT:

Contribute to the Armed Services YMCA charity to support the Big Bay Boom and the services for our military families and Wounded Warriors.

View all our Sponsors