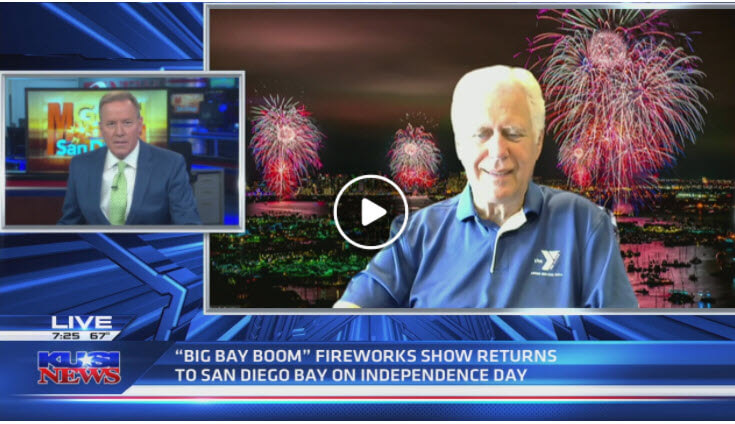 SAN DIEGO (KUSI) – Last year’s “Big Bay Boom” show was cancelled due to COVID-19 restrictions, but the show is back on in 2021, now only a week away.

San Diegans are lucky, as the Big Bay Boom is the largest fireworks show of the West Coast.

The Big Bay Boom will be visible over most of the northern and central parts of San Diego Bay, with viewing locations at Broadway Pier, Cesar E. Chavez Park, Coronado Ferry Landing, Embarcadero Parks North and South, Harbor Island, North Embarcadero, Shelter Island and Spanish Landing, although the best viewing areas of the show include the Embarcadero, Coronado, and Liberty Station.

Because parking and viewing areas fill up quickly, those planning to attend are advised to get to the waterfront early, and use public transportation if possible.

The Port is teaming up with the Metropolitan Transit System for expanded train, trolley and bus service on July 4, with the “Friends Ride Free” promotion for the major holiday. Viewing locations are located near the Convention Center, County Center/Little Italy, Gaslamp Quarter, One America Plaza, Santa Fe Depot and Seaport Village stations.

Schedules and station location details are available at www.sdmts.com/inside-mts/events/big-bay-boom.

Those driving are encouraged to find a guaranteed parking spot through SpotHero, a reservations app. Due to the large number of visitors to Harbor Island and Shelter Island, access roads to these parks may be closed to vehicles at some point during the day, but pedestrian access will remain available.

Double parking, parking in a red zone and parking against posted signs will result in citations and/or towing.

Port of San Diego Harbor Police, along with other local, state and federal law enforcement partners will be on duty during the event. Residents and visitors are encouraged to report suspicious activity to a uniformed officer, or call 911 or the Harbor Police non-emergency number at 619-686-6272.

According to Port officials, possession of opened alcoholic beverages, smoking and vaping are prohibited along the waterfront and in Port parks. Drones and other unmanned aircraft systems will not be allowed to fly within five miles of an airport and above crowds.

Boaters interested in watching the Big Bay Boom are encouraged to be extra cautious and pay special attention to the Coast Guard Auxiliary patrol boats with flashing yellow lights.

Coast Guard officers will be positioned to ensure boaters do not get within the 1,000-feet safety zones around the four fireworks barges.

The state Department of Public Health is also recommending that attendees of mega events (more than 10,000 people) get vaccinated against COVID-19.

More information on Big Bay Boom is available at https://bigbayboom.com/.