About the Fireworks Show

“A Salute to the Military Families of our Service Heroes”

Where to park:  See our parking page

On July 4th, San Diego’s North Bay, known as THE BIG BAY, will light up with a spectacular fireworks display orchestrated to originally produced music selections.  Given the natural amphitheater from Point Loma to Shelter Island to Harbor Island to Liberty Station to Little Italy to the North Embarcadero to Seaport Village and the South Embarcadero to the Coronado Ferry Landing, the “show” will capture the attention of hundreds of thousands of people.  This is the largest annual event in the western United States with over 500,000 people viewing the show. The “show’ will consist of about 18 minutes of some of the most technically advanced fireworks produced by one of the best worldwide operators of fireworks displays.  The fireworks artists will choreograph the 4 barge locations of pyrotechnics simultaneously to music broadcast “live” on 101.5 KGB radio.

The Port of San Diego’s Big Bay July 4th Fireworks Show was established in 2001 to bring business to the Port Tenants and to benefit the San Diego Armed Services YMCA’s family service programs for our military families including our wounded warriors at Balboa Naval Hospital.  San Diego has thousands of military personnel deployed and the families left behind often face specific challenges that the Armed Services YMCA helps them resolve.

Our Event Mission
To provide the annual July 4th Fireworks Show for the viewing pleasure of the residents of San Diego County and the visitors on land and on the water to the North San Diego Bay known as THE BIG BAY.   A particular focus will be to enhance the visitation to the Point Loma, Shelter Island, Harbor Island, Mission Hills, Little Italy, North & South Embarcadero, Coronado Ferry Landing,  and to promote the business interests on the Port Tidelands and the surrounding communities.

The net proceeds of the event will go to the  Armed Services YMCA whose goal is “to enhance the lives of military personnel and their family members in spirit, mind, and body, by providing programs that strengthen families and are relevant to the unique challenges of military life.” 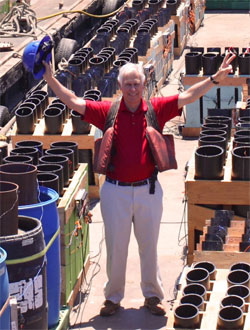 For years there was the Coronado Glorietta Bay July 4th Fireworks Show but no fireworks on San Diego’s “Big Bay” to celebrate our nation’s birthday.   In 2001, Sandy Purdon, the owner of Shelter Cove Marina and a San Diego Port District tenant, was concerned that July 4th was not a typical celebration on San Diego Bay. Having taken his boat to Glorietta Bay and having to struggle with the huge boat parking lot to view the fireworks, he decided to see if a fireworks show could happen off Shelter Island and Harbor Island in San Diego Bay.  The natural amphitheater of the “Big Bay” seemed ideal for fireworks. Over 500,000 people now attend.

Sandy had been the chairman of the Port Tenants Association in the mid 1990’s.  He knew the other business owners and managers on the tidelands around the bay.  This included the hotels, restaurants, marinas, shipyards, etc. He thought “if we bring more people down to our waterfront on July 4th, these businesses would benefit.”  He thought these businesses might be open to a fireworks event to help their businesses which were experiencing lackluster activity on July 4th.

The natural amphitheater of the “Big Bay” seemed ideal for fireworks

The first person in 2001 to step up was Joe Terzi, then the General Manager of the Sheraton Hotels on Harbor Island.  Other tenants responded positively with financial support and the first show with just two barges was organized.  The San Diego Port District came on board with a “Title Sponsorship” of financial support and “in-kind” support for traffic control, portable toilets, and park cleanup among other support on the water with the Harbor Police. In 2001 when the sponsors and the Port were on board to finance the event, Mr. Purdon realized that the event needed to give back in some fashion.  It was the idea of Capt. Paul J. Hartley, Jr., USN (Ret.) to suggest to Sandy that an ideal charity would be the San Diego Armed Services YMCA as they have over 40 free programs to help military families in the San Diego region.  Since 2001, approximately $400,000 has been contributed to the charity from the Big Bay Boom.

>> Read about the Economic Impact of the Big Bay Boom.

The SDASYMCA charity accepts sponsorship funds and personal contributions from the public.  Production, administration, event & environmental permitting, technical oversight, television & radio production, development, fundraising, grants writing, and overall control of the event is managed by Sandy Purdon as the events Executive Producer.  The event continues to grow in exposure to the world for the benefit of the San Diego business community and ultimately our military families in San Diego. Visitors particularly from the Southern California and Arizona regions plan their annual visit to San Diego for this event often taking the best view hotel rooms and reserving the best restaurant or dinner cruise vessels seats for the evening.

Fireworks displayed from four barges on San Diego bay. Where to watch

THE CHARITY WE BENEFIT:

Contribute to the Armed Services YMCA charity to support the Big Bay Boom and the services for our military families and Wounded Warriors.

View all our Sponsors