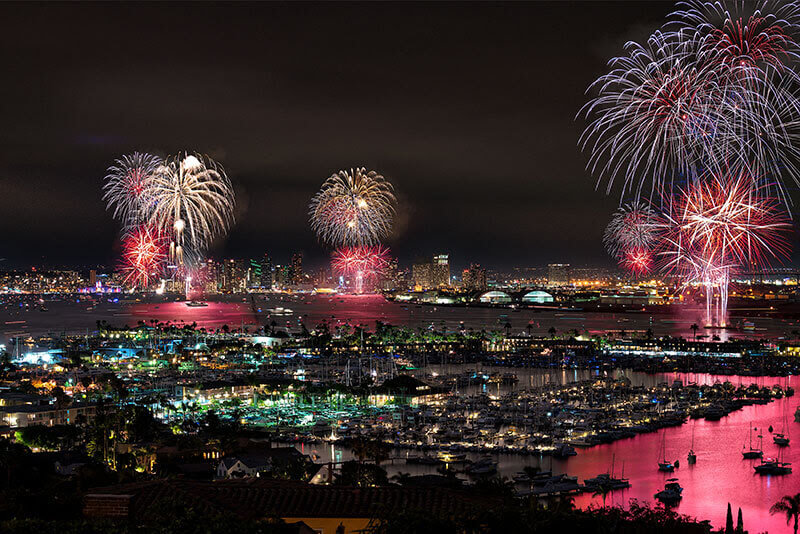 Get ready for a spectacular evening of pyrotechnics on San Diego Bay with the Port of San Diego’s Big Bay Boom. The annual holiday tradition is one of the most anticipated fireworks shows in the state and takes place at 9 p.m. on Monday, July 4, 2022.

Fireworks will be discharged simultaneously from four barges placed strategically around San Diego Bay. The barge locations are off the shorelines of Shelter Island, Harbor Island, North Embarcadero, and South Embarcadero. The show can be viewed from most anywhere along the northern and central parts of San Diego Bay, but the most popular areas to watch are at Shelter Island, Spanish Landing Park, Harbor Island, North Embarcadero, Seaport Village, and The Headquarters at Seaport District. Attendees are encouraged to arrive early, bring a lawn chair and blanket, and bring a radio to tune into the musical simulcast that will be broadcast live on KGB 101.5 FM radio.

“The Port of San Diego is proud to sponsor the Big Bay Boom,” said Port of San Diego Chairman Dan Malcolm. “This is one of the Port’s major annual holiday events and one that the region’s residents and visitors look forward to every year. It’s also an incredible economic boost for businesses that operate on and around San Diego Bay.”

The Big Bay Boom has taken place every year since 2001, except for a pause in 2020 due to the pandemic. Last year, the fireworks show returned to celebrate its 20th anniversary.

Due to the large volume of visitors to Harbor Island and Shelter Island, the access roads to these parks may be closed to entering vehicles at some point during the day. Pedestrian access will remain available. As part of efforts to ensure a safe and accessible waterfront, there will be zero tolerance for illegal parking. Double parking, parking in a red zone, and parking against posted signs will result in citations and/or towing.

Public Safety
To ensure a fun and safe experience for all, the Port of San Diego Harbor Police, along with other local, state, and federal law enforcement partners will be prominent on the bay and waterfront on July 4th. Public safety is everyone’s responsibility. Residents and visitors are encouraged to report suspicious activity to a uniformed officer or call 911 or the Harbor Police non-emergency number at 619.686.6272. The public should be prepared to describe who or what they saw, when they saw it, where it occurred, and why it’s suspicious. The public is reminded that possession of open alcoholic beverages is prohibited along the waterfront and in Port parks, smoking and vaping are prohibited in Port parks, and drones and other unmanned aircraft systems are illegal to fly within five miles of an airport or above crowds.

Boater Safety
All boaters interested in viewing the event on the water are asked to be extra cautious and pay special attention to the Coast Guard Auxiliary patrol boats with flashing yellow lights. They will be positioned to ensure boaters do not get within the 1,000 feet perimeter safety zones around the four fireworks barges. All boaters are also encouraged to review the ABCs of California Boating. Children under the age of 13 are required to wear a lifejacket on a vessel of any length. Boaters enjoying the fireworks should be conscious of and avoid anchoring within eelgrass habitats. Eelgrass is an important habitat for juvenile fishes, seabirds, and other animals. It is easily damaged by boat anchors and propellers, so please avoid anchoring in eelgrass while enjoying the show.